A Field In England 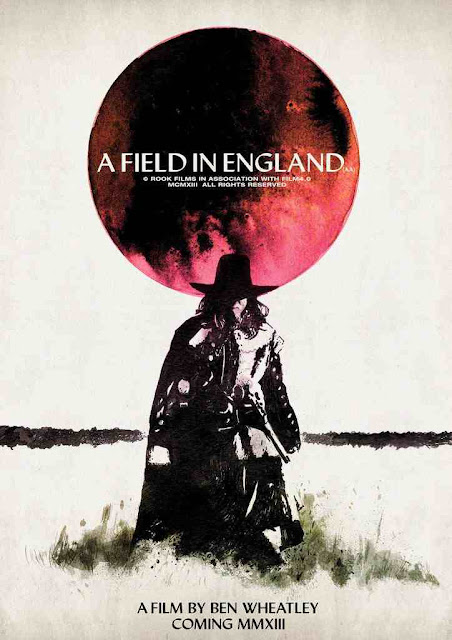 A small group of deserters flee from a raging battle through an overgrown field. They are captured by two men: O'Neil and Cutler.

O'Neil (Michael Smiley), an alchemist, forces the group to aid him in his search to find a hidden treasure that he believes is buried in the field.

Crossing a vast mushroom circle, which provides their first meal, the group quickly descend into a chaos of arguments, fighting and paranoia, and, as it becomes clear that the treasure might be something other than gold, they slowly become victim to the terrifying energies trapped inside the field.
Don't normally do this sort of thing, but I'm really looking forward to this film for obvious reasons. and that is a great retro poster. My only worry is the possiblity that it won't be an evil force, but just a bad trip from the 'shrooms.
As for normal updates, a big bit of scenery is almost done and should even have a fairy ring as well...
Posted by anevilgiraffe at 12:03

Now that sounds intriguing; I think you may be spot on with your plot analysis though.

Sounds interesting, though, as you write, it could be about 'shrooms and not have any supernatural elements. Mind you, neither does Witchfinder General...

true, but War Horror always tends to end up as the evil-you-bring with-you kind of element. Deathwatch, The Bunker, The Squad, that Korean one that escapes me at the moment, all are more down to the isolated, disfunctional group falling apart.

The drugs being the real culprit wouldn't necessarily be a cop out. Ref. the movie "Cookers", which had a very ambiguous ending. Was it the drugs? A haunting? Either way, creepy as f**k.

oh, not saying it's a cop out, just points to that disfunctional group turning on each other bit that seems too common in the subgenre. Can't think of many War Horror films that have more supernatural threats (and aren't some recent crap SyFy original dodgy cgi-fest) - the Keep I guess, and I remember something linked to the Exorcist set in a German castle after the war.