ok, so as the fleet scale idea kind of fizzled away, discovering the rules for Star Wars Silent Death online was at least something and as great a game as X-wing looks, it also looks damned expensive for what you get, so this became X-wing on a budget... free rules was a good start...

(past the following into the address line)
http://replay.web.archive.org/20060913232852/http://www.wizards.com/starwars/downloads/SW_Silent_Death.pdf

of course, me being me, scale is still a problem... so going back to my rough equivalents:
the Falcon is a little under 3 X-wings long and a rebel transport is roughly 3 Falcon's long.
an X-wing is 3/4's the length of a Y-wing
an A-wing is 3/4's the length of an X-wing
not too fussed about the B-wing, it's longer than a Y, but will be in a different plane anyway, so is more easily fudged.

An obvious cheap source for fighters is Studio Bergstrom's 1 inch fighters, nice clean casts that fit together quite nicely, actually cheaper than the bendy Micro Machine stuff on eBay. 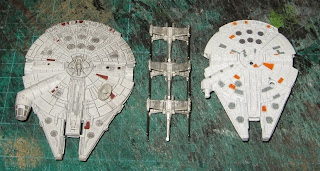 first problem, a 3 inch ish Falcon - so far the Titanium is perfect for length (ignore the absence of key components, had dismantled it to see about tarting it up), but is a fat one, and is in fact fatter than the larger Deagostini 3.5 inch Falcon, the raised corridor sections that lead to the lateral docking rings stand far too high and just look silly - so high in fact that there is a massive flat area on the end with no detail, that the docking rings themselves just can't hide. As it's diecast (both are), that's a pig to try and fix. The Deagostini Falcon on the other hand is a lovely little model, very trim and looks like it could outrun just about anything.... but is technically too large for the Bergstrom rebel fighters...
bizarrely, this has now taken me back to that picture of the Action Fleet Blockade Runner, pity they go for so much nowadays.

now, in my mind the TIE's look great with the bigger Falcon. The Y-wing is too small for the X-wing, the A-wing works with the X-wing ok, but just looks  better with the much smaller MM Falcon. the MM TIE bomber is a good match for the Bergstrom TIES and that will become a TIE boarding craft I think. 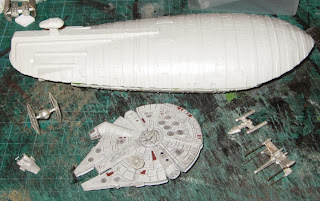 now I think I can just about ignore the slightly undersized X-wings, I've seen online that the Starship Battles Y's are good against the Bergstrom X's. I'd kind of prefer a slightly larger A-wing against the Falcon (because lets face it, I'm using that one regardless - it's just such a nice model).

The transport is the ERTL/MPC Hoth base one, 9 inches long and again perfect for either of the two diecast Falcon's. The Hoth base Falcon is 5 inches and would probably work really with Micromachine fighters (as everything is roughly 2 inches long in that range, the X-wing would work really well). I'd already started tarting that up, but may end up eBaying it.

so, any one got a SSB A-wing that they put a length to?

Down the line, I'm going to need to acquire something for the Empire - Slave 1 is always a fun option, but also need some objectives - shuttles or cargo ships are a good one...

Posted by anevilgiraffe at 18:56