well, ok the Sontarans aren't technically part of the update a month thingy as they were done mid 2008, just needed rebasing... however, I've not got much else finished at the moment, I'm working on some stuff for the Frother's game for Salute 2010 - ruined tower and some warbands, but I need to contribute more ruins - and am doing my first painting commission which may be my only one as it's not nearly as much fun painting for someone else...

the Frotherheim stuff will get a showing on here in time...
the good news is I've finally tracked down an Ice Lord which means I can finally do my Ice Warrior unit, which means I then need to finish my Draconians so they can both donate models to Abslom Daak and the Star Tigers... 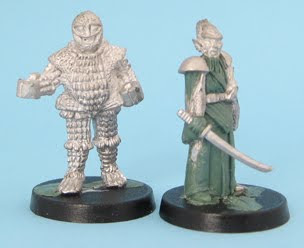 Posted by anevilgiraffe at 20:31 No comments:

time to finish the rebasing... so here are my Sontarans from about a year and a bit ago... first up are the Sontaran Special Space Service, the elite storm troopers of the Sontaran Empire: 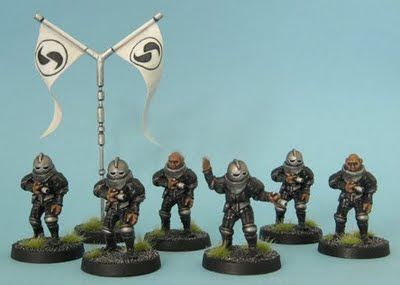 all of the Sontarans are from Black Tree Design, with a little bit of conversion work (head swaps and some reshaping of the collars - which meant the probic vents needed to be changed as well) to make them all uniform. The bare heads come from the Sontaran trooper figure... I've reglossed the armour and fabrics after they've been dullcoted to give them the shine they had in the series... the banner is scratch built - I wanted something to look similar to the flag Lynx planted in the Time Warrior that expanded out from a simple rod, hence the sectional look. The banner itself is also from the Time Warrior and was printed out and painted over. next up are the Sontaran Assault Infantry: 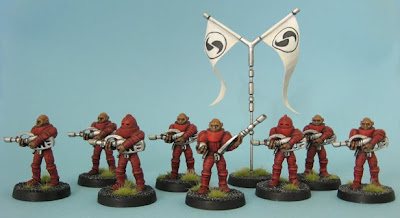 I've been a bit free with the standard Sontaran trooper figure, first off, new sleeves and collars for all of them to fit in more with the other minis, the two helmets that came from the S.S.S.S. conversions find a home here (seeing as the bare heads came from here in the first place) and, as the guns and arms are seperate castings, by a stroke of good fortune I was supplied with an extra arm that allowed me to convert the leader figure... the Meson gun is one of the worst designs ever, but it was in the series, so what can you do... fluff has since explained the strange curvey bits as blade attachments, so the weapon is part gun, part hand to hand weapon which makes it bearable... I went with the red armour from the Shakedown spin off to distinguish the unit from the S.S.S.S. and it stands out nicely... Lords of the Storm by David McIntee expands the whole Sontaran Army and gives the colour divisions for each arm of the Empire, if I ever get the chance, I'll do some more for the other arms... finally, the Sontaran Experiment... 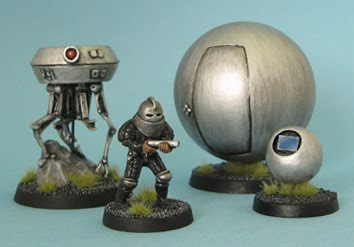 the Sontaran Military Assessment Survey with the continuity hiccup of five fingers and a different gun... the helmet was greenstuffed over the bare head as I prefered the helmeted look... the comm unit is just greenstuff, the scout sphere is a Christmas bauble with the door scratched into the surface and the Enslaver robot is a Star Wars Probe Droid with the head replaced with a 25mm round slotta and an eye and panels from greenstuff... not 100% happy with the tufts on the comm unit and the sphere, tried to hide the wire that gives the floaty appearance, but will probably strip off the tufts and redo them some how... the wire on the robot was necessary after a house moving disaster... sigh
Posted by anevilgiraffe at 20:03 No comments: