Some roads for a more built up rural area. These are actually designed for the 15mm Sword and Sorcery range from Crom’s Anvil, designed to be a long abandoned ancient roadway ala Conan, but the size meant they would work for my 28mm Folk Horror stuff as narrow lanes (going too wide would not be ideal either with my small skirmish table and they are by coincidence the width of the gateway on my Manor House). Plus they’re good value and Michael is a decent bloke. 28mm slotta base for scale. 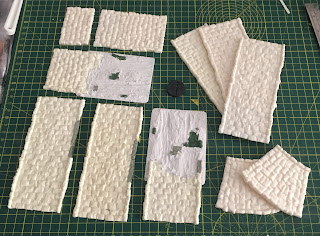 So, they are available as straights, curves or road ends. I sanded down the underside of the road ends and added a bit of 1mm plasticard so I could extend a broken trackway and dirt carriage ruts to run into the grass of the table. I took a quick press mould of some of the kerbs and slabs, and added some green stuff kerbs and slabs further into the grass. The greenstuff was the end of a roll and not very fresh, so not sure if it’s as good as it could be, painting will tell.

One of the straights was actually shorter than the others, not sure why (EDIT: turns out there are two different straights, I just happened to get one of the shorter ones and the rest the longer ones) but as I planned a T-junction anyway, I cut that up and pondered long about how to attach it. The sanding down and adding plasticard trick is a major pain so ended up ditching that plan and figured I’d just replace the kerbs in a stretch with flatter stones as a sort of pseudo gutter. Luckily I had a bag of architectural freebies from Fenris Games that included flat stones, some of which are perfect for the kerb width (I also used a couple of the road ends). 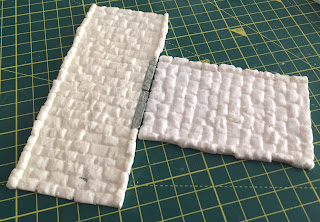 I’ve kept the cut down straight section to allow for a bit of variety on the layout. Ideally I’d also like to add some squat Romanesque corner stones at junction, but waiting on new greenstuff.

Posted by anevilgiraffe at 19:23 3 comments: