away with the Faeries... 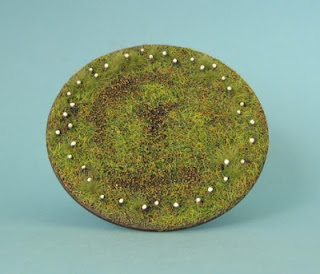 right... a larger whole with a couple of small bits... first off, a Fairy Fort - ok, so the term is Irish, but I like it and it fits the job. Bit of a bugger to photograph, but somewhere in there is a corner of a long forgotten Iron Age hill fort, eroded and overgrown and too big to photograph properly sadly... 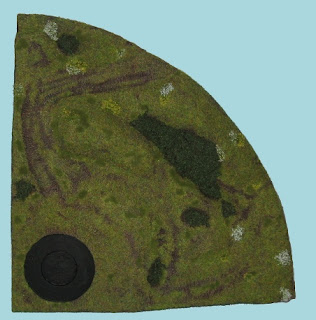 a simple enough construction, a block of old polystyrene shaped - it started off as a simple hill with smooth sides, but then thought about roughing it up a bit to make it more interesting. This eventually triggered a memory of the Fairy Forts and a few broken rings and ditches were made, with a well worn path to the top.

At the top I've made a round recess to take the old mini-discs I'm using for some basing so I can swap out what is at the summit. First up is a Fairy Ring, a natural circular growth of mushrooms. 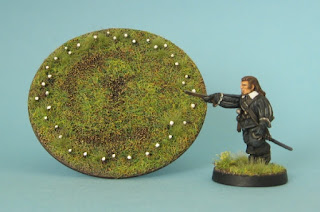 I had been meaning to do one of these for a while, but getting the 'shrooms right was a pig as they never had that strong enough a join to the base. I ended up supergluing a ring of really thin plasticard to the disc, and then using poly cement added some plastic rod of varying heights - I had planned on adding discs for the mushroom caps, but then realised they'd be far too big, so just painted the tips of the exposed rods white and darkened down the rod with Devlan Mud. With the static grass added and a few clumps (as the mushrooms usually promote luxuriant grass growth as well), the rod pretty much is hidden and you just see the blobby tops in brilliant white. Job done.

Next up was a suggestion from LAF, a beacon. As they tended to be placed on prominent locations, the top of the fort seemed a good spot, so that was in mind when the hill fort was being built. I picked up a GW Bretonian Archer brazier, cut the top off and added it to a length of brass rod. The ladder was made from plasicard and plastic rod and made as rickety looking as possible. The bucket is from the Redoubt female villager who got turned into a ghoul. 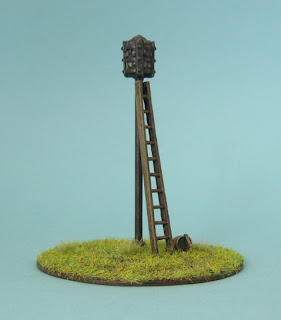 the paintjob was a bit of a problem though. Bare metal didn't look right, so it had to be blackened ironwork - which then posed a problem with the coals in the brazier. I didn't want it lit or glowy and I had considered wood, but the shapes were too irregular. Not 100% with the difference between the coal and the ironwork, but it will do for now. 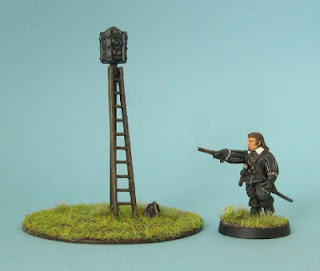 of course, by a lucky coincidence, the gibbet is also on an old mini-disc and is also something that would have been placed prominently, so that made another option for the summit. 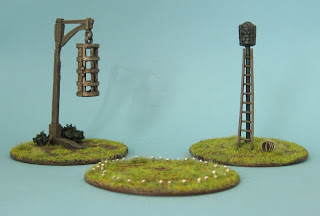 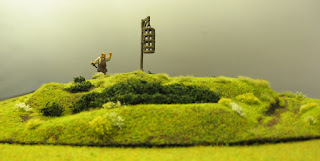 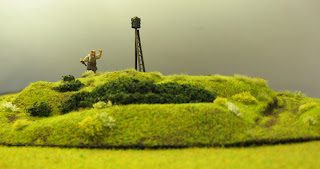 As I said, hard to photograph, but you get the idea.
Posted by anevilgiraffe at 00:59 4 comments: