So, The Silver Bayonet rules came out and it’s perfectly what I’ve been looking for… black powder, gothic horror and solo play (on account of me being so antisocial). Plus it can move to my ECW Folk Horror setting perfectly (just remove the vampires - there is no vampire in English folklore at that time, very much a European thing), and vice versa a lot of what I have already fits the Napoleonic setting.

With that in mind there was no harm in getting some splendid chaps to form my unit of British monster hunters (6 nations are covered in the rules, with scope to adapt those lists to any nation of the period, but I already had some Nappy Highlanders for an abandoned project). Plus an excuse to have some excellent Perry sculpts again. 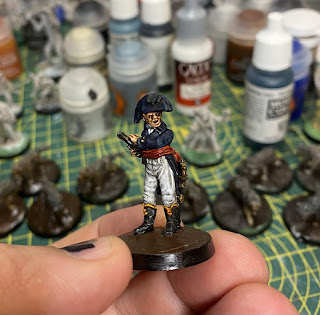 This is from the Perry Royal Navy Landing Party set, which gave me some nice options for the more specialist troop types. This chap will do duty as a doctor, so can stay in A Roysl Navy uniform. 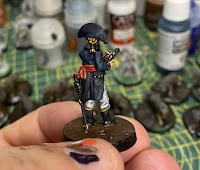 Mostly in contrasts, which are helping me overcome a severe loss of mojo…
Posted by anevilgiraffe at 00:43 1 comment: 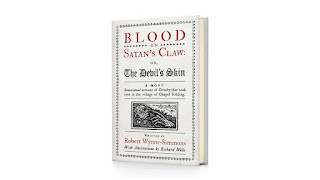 I couldn’t deny this… a beautiful looking hardback edition of my favourite film… pledge here - https://unbound.com/books/blood-on-satans-claw-or-the-devils-skin/?fbclid=IwAR1fcl4FAOE6y2FZ7FbefnKSQQzW8Ak_hv3-3JjD79ja99OfokdTdWi4Ha0