Revenants for The Silver Bayonet - undead resurrected from numerous battlefields and a handy use for all the marching with muskets shouldered figures you seem to inevitably get on every sprue. Skulls and zombie heads from Mantic.

I’ve seen folks go really damaged with these, but I couldn’t be bothered, head swaps will do and a quick paint job with an Agrax Earthshade wash dirties them up. Good enough.
Posted by anevilgiraffe at 19:34 1 comment:

The supernatural investigator is converted from the Perry Royal Navy Landing Party (getting good use out of those). The Navy rosette was removed from his top hat and with his tasseled military boots cut back and turned into riding boots with greenstuff, with the right paint again, he’s something of a dandy adventurer.
The final clue marker is almost done, still quite pleased with these.
And a Living Armour, an animated  suit of armour as per the random encounter table. It’s a Perry War of the Roses knight with his face carved out. Still some work to do on that one.

And goblins WIP, in this case Reaper Gremlins that I think fit the job quite nicely. I want my fairy foes to be quite slight, and they are bloody tiny.
Posted by anevilgiraffe at 00:13 No comments: 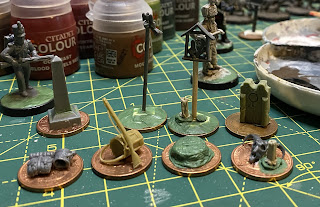 A key component of the Silver Bayonet is searching for clues,  which requires markers. Various bits and bobs contributed, bits from the Perry French sprues, Victrix sprues, Wargames Atlantic skeleton sprue, Fenris Games gravestones, some MaxMini candles, a random GW bit and the Renedra graveyard sprue. All on pennies for weight.
I later realised that the drum on the Perry sprues were much crisper than the Victrix one, so that got redone and was behind on the painting for the group shot.
Posted by anevilgiraffe at 23:56 No comments:

So, a really productive month for me… hampered only by the freezing temperatures which means I can’t go outside and varnish.

But, lots of unfinished bits. Starting with the Dark Watch, my Highland regiment themed warband for the Silver Bayonet. 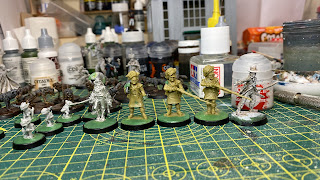 Some goblins and wolves as well in that shot. But L-R, my officer, a highlander, two infantrymen and a supernatural investigator.

Victrix Highlanders, the (classed as for the rules) infantrymen are pretty much straight from the sprue, the highlander has a two handed sword from a Fireforge medieval sprue of some flavour over one shoulder. The piping on the flank company epaulettes was a bit inconsistent between poses, so I just filled them in and went with solid black. I also got some Blackwatch kilt decals for the kilts, but they were an epic faff, so I went back to the brush, opting for the Hebridean tartan (for reasons). 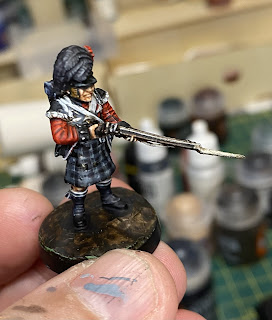 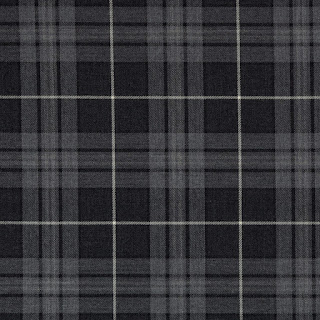 The Dark Watch was apparently an alternative name for the Blackwatch in their very early days and suits the theme very well. But I needed a pioneer (a sapper for the rules), so converted one from the sprue, using some bathing brass sheet to form the basis of the apron and greenstuff for details. 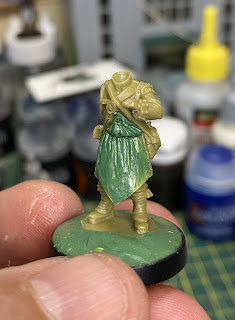 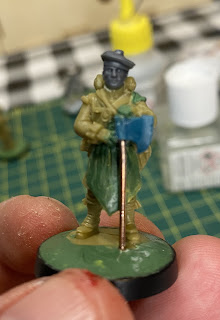 For variety, he got a head from the Warlord Games 95th Rifles sprue, that looked the part. The axe head is from one of the GW Nightgaunts that were cheap with one of those part works GW do now and then. 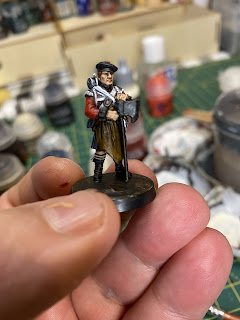 The officer is from the Perry Miniatures Royal Navy Landing Party, which also provided the doctor and the supernatural investigator. With the naval rosette removed from his hat and a suitable paint job, he passes for an infantry officer sans bling. Dressed down seems appropriate for covert missions hunting monsters. 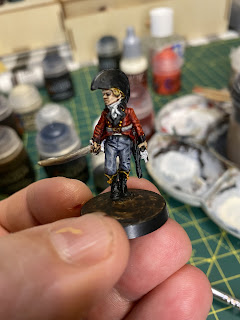